Given a linked list, remove the n-th node from the end of list and return its head.

Merge k sorted linked lists and return it as one sorted list. Analyze and describe its complexity.

We iterate all the numbers of all lists, and store them in an array.  After that, we sort the array and transfer the result to a new list. After that, output the final result.

Time Complexity: O(n*log(n)) We construct the array, which takes O(n) time, and sorting the array takes O(n*log(n)) time. n is the number of total nodes in all lists.

The general idea is like the picture demonstrated below. We compare all the lists in one column. We first find the smallest number of this column and make it our head node,  then we move this list forward, and compare the new column again, until we find the second smallest element, then we connect our head node to this node. After that, we move forward the second list and continue this progress until all lists are empty.

Note here we do a tiny trick that we always connect the current smallest node to the previous smallest node, so we can make the space complexity O(1). 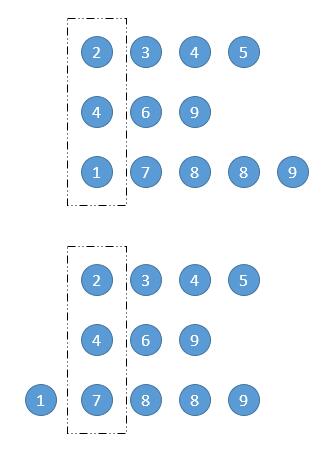 Time Complexity: O(K*N), N is the length of the longest sub list. K is the number of the lists.

This idea is based on the Solution Two. In Solution Two, we can see that, each time when we want to find the current smallest element, we need to iterate all the lists, which takes O(K) time. When we find this element, we connect it with previous found nodes, we need O(1) time. Can we do better here?

The rest of the idea is the same. If one list contains the current smallest element, we pop out that node, and move forward that list one Node ahead.

We did this trick to reduce total times of merging. The merging process will consumes O(n’), n’ is the average number of all lists. We will do the merging process log(k) times instead of k, so the time complexity is O(n’*log(k)). 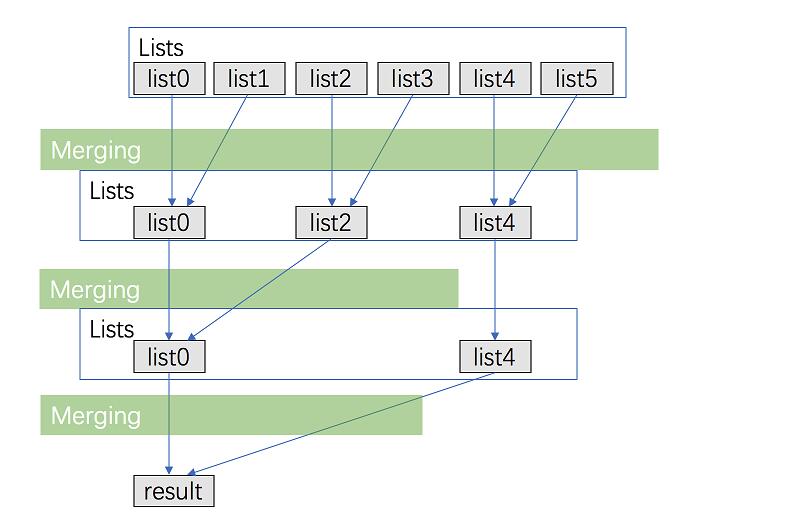 That’s all for today, thanks for reading….