The string "PAYPALISHIRING" is written in a zigzag pattern on a given number of rows like this: (you may want to display this pattern in a fixed font for better legibility)

And then read line by line: "PAHNAPLSIIGYIR"

Write the code that will take a string and make this conversion given a number of rows:

This problem is more like find the right rules of zigzag strings. 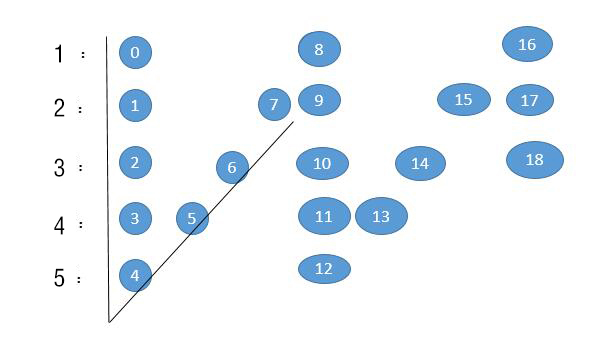 If we take a close look at the picture above, we will notice that the graph is periodical. We can see the elements from the first row has the rule like below:

OK, now we have known basic rules. We only need to apply these rules to our code. We write loops to scan each row, and calculate the indices for each element, and store them in a vector. Each time when we scan a new elements, we need to check it is not out of boundary.

Time complexity: O(n). We only need to touch every element once.

Implement atoi which converts a string to an integer.

The function first discards as many whitespace characters as necessary until the first non-whitespace character is found. Then, starting from this character, takes an optional initial plus or minus sign followed by as many numerical digits as possible, and interprets them as a numerical value.

The string can contain additional characters after those that form the integral number, which are ignored and have no effect on the behavior of this function.

If no valid conversion could be performed, a zero value is returned.

Although the statement is very long. Actually, it is not a hard problem. Basically, we need to take care of several situations:

1. Discard as many white spaces as possible;

2. If the first element is not digit, then return 0;

4. When we first encounter ‘+/-‘ sigh, we need to determine whether the final number is positive or negative;

5. Except all the situations above, we need to extract as many digits as possible.

The solution is pretty straightforward.

The two problems are not hard… That’s all for this week.