Introduction: “Underwater rendering” is a technical demo which depicted a vivid beautiful shallow sea scenery. I want to apply lighting and shader techniques I have already learnt, and combine these with my previous art background to simulate a vivid underwater world.

I wrote my codes using C++ and applied several OpenGL features: multisampling, texture mapping, tangent space normal mapping, lighting and depth map shadows. I also created several different shaders (GLSL) to distinguish different objects in this scene. I animated all the fish in the shader program and generated an interesing particle container to control behaviors of the fish.

Code can be found: https://github.com/zhangxiaomu01/CGT520FinalPro

Introduction: “Naboo Training Base” is a virtual reality game which aims at creating a fast paced first-person action game (Unreal Engine 4). In this group project, I was responsible for setting up all the game-play features and designing our own AI system by utilizing the powerful blueprint and the behavior tree system of unreal engine.

Introduction: A commercial project which was designed for simulating a vivid forest conflagration in order to help firefighters understand how to control forestry fire in real world.

I was responsible for writing shader programs in Unity 3D engine in order to create an interesting and dynamic burning effect for trees. In this project, the fire will ignite the tress and finally destroy all the leaves. After the fire was eliminated, the trees could slowly recover from the burning state to burnt state.

There is Only War

Introduction: “There is only war” is a game that I made with my schoolmate for my graduation project. In this project, I was responsible for designing most artistic work and game play while my schoolmate dealt with codes. “There is only war” depicts an apocalyptic world where two factions fight with each other. Players can choose to join one of the factions. The target of this game is to destroy the command base of another factions. The game contains simple AI system, single player mode, multiplayer mode based on LAN, weapon system and so on.

More details can be seen: https://wp.me/p9kOYy-5M

The beauty of Wangshi Garden

Introduction: “The beauty of Wangshi Garden” is a two-year project which is designed for promoting and protecting oriental garden, Wangshi Garden. In this project, I played a role as a scene designer who modeled some of the architectures and placed the whole scene in Unreal Engine 3 according to real Wangshi Garden. Here is a few images about the final result:

I have worked for Qingty company for two and a half years after my graduation (from July 2014 – Feb. 2017). Qingty is a start up company which aims at providing sharp graphics products such as 3D real time face modeling and 3D human body scan system. I served as a graphic designer in this company. My main job was to write python scripts to boost Maya efficiency, make and ameliorate models for our 3D human body scan system and make special 3D templates for our Sanstone app. The projects listed below are our products.

A commercial project which was designed for selling customized crystal internal sculptures. Users could use this app to model their 3D virtual faces and then send his/her models to make crystal internal sculptures. When a user completed the modeling process, his/her face model will be generated by our server, we could merge his/her face models with our pre-defined templates or keep his/her original model as a bust model. After that, if our user want to buy a crystal sculpture, we could use his/her model as input data to our laser crystal sculpture device, and then engrave and send the final crystal sculpture to our user.

In this project, I was mainly responsible for modeling and ameliorating existing model templates, mostly using Maya and meshlab, also writing Python script for Maya to boost whole efficiency. 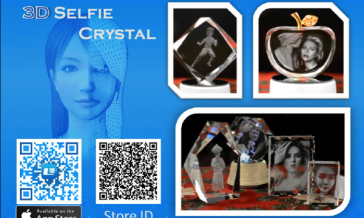 We have our own human body scan system, which is a fast and convenient tool for human body scan. Basically, subjects just need to stand in the middle of our scan system, after a quick scan (less than 10s), our algorithm will generate the human models immediately and the subjects can see the results in 3 minutes.

We applied our systems for virtual try-on and virtual measurement. I was responsible for creating virtual clothes and put the clothe to our scanned models. I tested and updated my work flow for several times, and finally incorporated all my work with the scan systems. 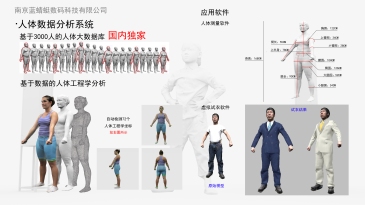